A few years back, I read an article by the father of the straw bale phenomenon, Joel Karsten.  He was advocating growing things in a bale of straw, oh, so many things. (I’d link you to his site, but he’s more about selling his products than providing useful info, so no link.)  Being the curious sort, I wondered if this would be something I could do at the NSSL.  There are lots of websites and articles on how to achieve bale nirvana, but I’ll discuss what’s personally worked for me in beautiful southwest Michigan.

The trick, such as it is, is to get the bales to rot from the inside out.   I know, gross, right?  But it’s really the magic of decomposition and heating them up that makes this so great as a growing medium.   But Amy, you ask, how do I make them rot quickly?   It’s beyond easy, so pay attention:

Straw is, well, like a straw.  The cut side shows the hollow part, and this is the side you want facing up.  The process will work if you don’t do it this way, but it works better if you make sure the cut straw ends are  facing up, so they can carry water into the bale more effectively.

Once you’ve sited your bales, begin watering them. Let me discuss siting the bales.  Put them where you want them and leave them there.  My first year I used bales I had in the backyard that I used to build a winter shelter for a feral cat I fed, the dearly missed SpareKat. I figured I’d just move them to the front yard, I mean, how hard could it be?  I rued the day I made THAT decision, while I was lugging soaked through bales that had spent the winter outside. Not only were they heavy as hell, they were gross and full of bugs and worms.  In the general way of things?  Awesome!  While you’re trying to carry them next to your body?  Not so grate, akshully, as they say in the land of lolcats.  The 2018 bales were placed last fall like so: 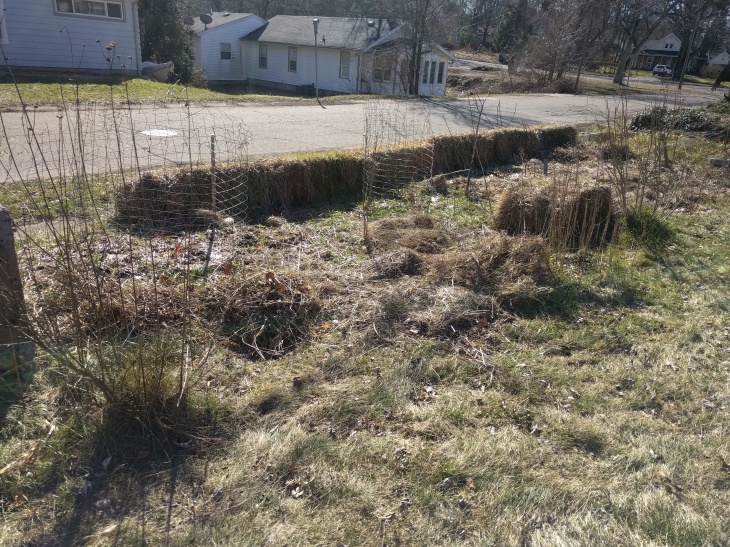 We placed them on their sides to take advantage of snow moisture.  Soon I’ll go out and pull them upright by their strings and start part two of the process:  the decomposition!

To do this, you’ll need a high nitrogen fertilizer to get things cooking in there.  I absolutely recommend spending the money and getting organic blood meal.  I use the Espoma brand blood meal, but there are many out there. Yes, it’s exactly what it sounds like, and it’s wonderful stuff.   Not only does it do the job quickly and very well, it keeps animals at bay because to an animal, it smells like an abbatoir.  I’m okay with that.  I’ve had very little animal trouble in my bale gardens, even from my brazen city deer.

Warning from the regretful voice of experience.  Do not cheap out and get Milorganite. This comes in a bag, and it’s cheap, and it is indeed very high nitrogen, as it’s pretty much recycled poop.  Not only does it not disperse through the bale, it burns the hell out of your plants.  It also draws flies.  It took ONE season to learn that hard lesson and return penitently to the church of  organic blood meal.   Hear and heed, oh bale n00bs.

Sprinkle a good amount of blood meal across the top of your bales.  You don’t want piles of it, but you want to cover the top of the bale in a thin layer. Thin is okay because you’ll be adding more later.  Water it in.  Keep watering.  Water the heck out of those bales. If you plan ahead, you can have them  set up prior to the spring rains, which will assist you in the constant watering task.  You want them to be wet, and the blood meal to be carried into the bale where it will work with the wet straw and start decomposing.  Go out every few days for a couple weeks and replenish the blood meal across the top of the bale.  After a while, particularly as the weather warms, you’ll see this: 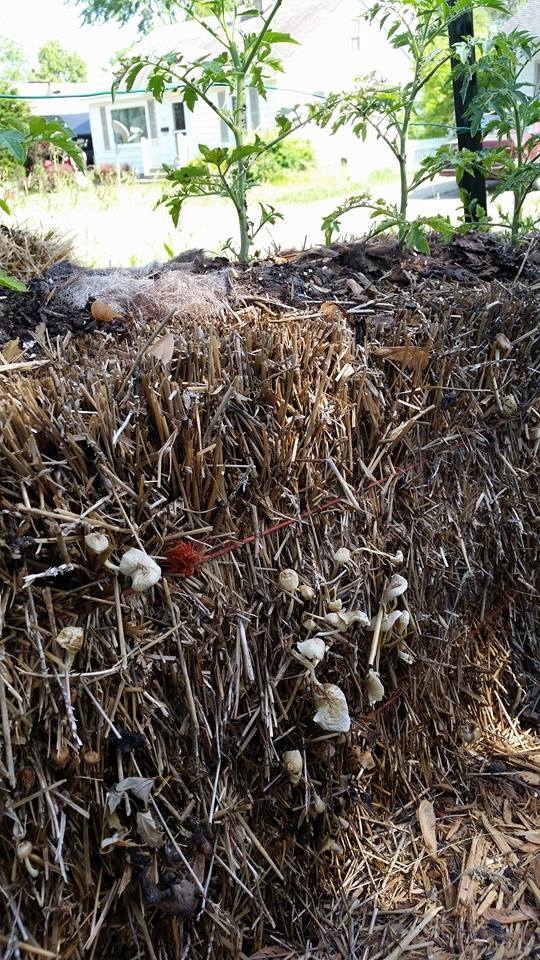 You know you’re doing it right if you’re getting fungus!  You’re fine if they don’t pop up, I’ve had good growth without them, but this is proof of a good, living bale.  (Although, this is the year I used Milorganite.  You see the black sludge on the top?  That’s essentially reconstituted poop.  It wasn’t pleasant.)

Once you’ve been watering and blood mealing for a couple weeks, you should be able to shove your hand in there and feel a give in the straw, and possibly some warmth.  This is decomposition, friends.  It’s a nice oozy gross place that will feed your plants.   At this point, you can begin to plant.  This is the stupid easy part:  just shove a trowel or your hand in there and pull to one side.  Put your plant in there, with the dirt that came with it in the little pot or cell, and them close it.  Water them in.  Boom.  For my tomatoes I go out a week or so later and put a little tomato-specific fertilizer on.  I like Espoma Tomato-Tone. I’m actually pretty partial to the whole Espoma line, particularly as I try to grow organically.  I can personally endorse their Rose-Tone product as well.  It’s done wonders for my roses.  Ths spring, I’m trying the Soil Acidifer on my blueberries to help them get a good start. I don’t think I did enough for them when I planted last year.

Full disclosure: I used to be a participant in the Amazon Services LLC Associates Program, an affiliate advertising program designed to provide a means for me to earn fees by linking to Amazon.com and affiliated sites. Not anymore, so shop around for the best price on those products. 🙂

You don’t need to do anything in the way of supports, nothing at all. You can let things sprawl where they will.  The first year, though, I put posts at either and strung wire between to train up the tomatoes.

You can also just shove a tomato cage in there.   By the end of the summer I had Dragon’s Egg cucumbers all up to the top of the cage.  It was pretty neat.  This is another photo from Milorganite Summer.  Those peppers didn’t have a chance. 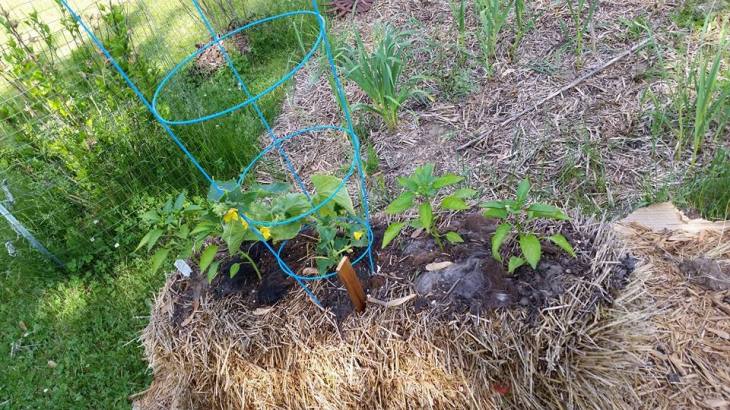 I’ve had remarkable crops of tomatoes, green beans, and peppers in bales. I’ve had middling luck with cucumbers. I think summer crops that really like the heat are well suited to bales, but the internet tells me that you can grow cabbages, which are cold season crops, in them just as well.  I’ve also seen a lot of stuff about growing potatoes in them, and I can see where they would do well in a bale.  However, that’s my next post, how to grow a MST of potatoes easily without digging and hurting one’s arthritic knee.

This year I plan to put up posts and wires again. The bales will be tipped up across the front of the berm next to each other, as pictured above, and I’m going to train up the tomatoes to form a tomato wall.  I think it will be impressive, and cool. I garden for myself, make no mistake about that, but I have so many great conversations with passers-by about garden life. I think this will be a conversation starter, and I look forward to that.  I’m kind of a zealot on how to grow things.

Speaking of conversations, please comment on any of my posts if you have something that’s worked well for you or questions you might have. I’d like to get a good gardener community rolling here.

figuring it out as I go, since 1967 View all posts by Amy Crabtree Campbell

I’m the store-bought version of Ina Garten. Cooking my way through all 1,200+ of the Barefoot Contessa’s treasure trove of recipes.

Food for Bellies, Food for Thought

I don't know what I'm doing, but I'm gardening anyway.

Action for a Better Life and World

From Buffalo to the Bible Belt.