Hey, green thumbs! Tonight, just in time for St. Patrick’s Day, we’re going to talk about how to grow a MST of tasty potatoes without digging. I’ve been doing this for a few years now and I can absolutely testify to its effectiveness and the lack of real work required.

The trick is to get really good seed potatoes. Yes, you can use the potatoes that you have on the counter that are so far gone, with so many eyes you’re embarrassed to go into your kitchen in your underwear. Please don’t, though. Give yourself the best odds of success, and order good healthy potato sets online, or even better, get them locally. You could get the ones you see at Meijer or Lowe’s, and take your chances. Or, if you happen to live in the Kalamazoo Portage Metroplex, go to Schram’s Greenhouse, located at the corner of South Westnedge Avenue and Garden Lane (yes, really).

The great thing about Schram’s is that you get to pick the ones you want. None of this big box store crap where you buy what APPEARS to be a good set of seed potatoes, only to get home and find that the ones on the inside are gross and rotten and flat out nasty. That’s no fun, and a waste of time and money. At Schrams, you get to pick through their bins of several types of potatoes and choose the ones you like most. Be gentle and try not to knock off all the eyes. Heads up, Schram’s only takes cash or checks. No cards.

I bought mine from Jung Seed this year, b/c I’ve had great luck with their products. In the past I’ve grown Red Pontiacs, Adirondack Blues, and various white potatoes. This year I’m growing Yukon Golds and Kennebecs. Yukon Golds are really delicious and lend themselves to a wide array of preparations. Kennebecs are awesome keepers, which means that they store well. I’ll be doing some storing this year, so I’m really interested in things that keep well. I’ll be doing a post soon on all of the things I’m growing in the yarden this year and why. But I digress.

You can get your seed potatoes two ways: cut up in sets, or whole potatoes. If you get them cut up in sets already, you can go get a cup of tea or something. You whole potato people, listen up. Cut your potatoes into chunks that have at least one eye, preferably two, on the chunk. Don’t make them too small, as this chunk will feed your little plant as it gets started. The eye is the part that will become the plant, so you want to have good, healthy eyes on your chunks. Let them set out for a couple days, to form a bit of a scab over the cut part. This is called curing them. It keeps you from putting a raw edge in the dirt. I’ve done it, and nothing horrible happened, but why risk making it easier for bugs, viruses and other malevolent things to get into your fresh young sets?

Potato set people, come on back. Are you all ready? Good. You can grow potatoes in all kinds of containers. My cousin Jessie grows hers in burlap bags. I’ve grown mine in tubs and five gallon pails. The main thing here: DRAINAGE HOLES. I didn’t do that the first year, and there is no stink like the stink of rotten potatoes in a mucky, disgusting pot. Hear and heed, my gardening friends. Hear and heed. Gross. I’ve seen potatoes grown in trash cans, and garbage bags, and even some highfalutin’ fancy contraptions made from pallet wood. (One thing about pallet wood. I know that Pinterest has you frothing at the bit to make The Cutest Stuff to plant in, and that’s awesome, as long as you know where your pallets are made. Some pallets are treated with various chemicals you probably don’t want in your garden. It’s the same concept as using railroad ties in your landscape, which are generally treated with creosote, again, a substance you may want to avoid in your garden.) I have a motley assortment of various plastic pots collected over the years, but I’m replacing them these year with these cool fabric pots: 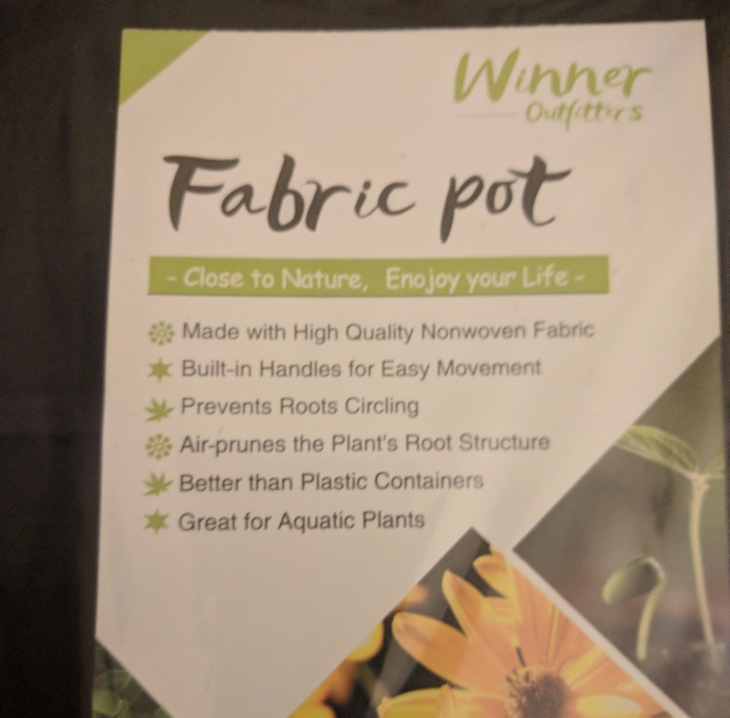 I bought these in 10 gallon and 7 gallon sizes. I will be growing potatoes in the 10 gallon ones. I chose these because I think having uniform sizes and types of pots will look better to my neighbors. I want to be a courteous farmer. Also, they fold down at the end of the season and look like this: 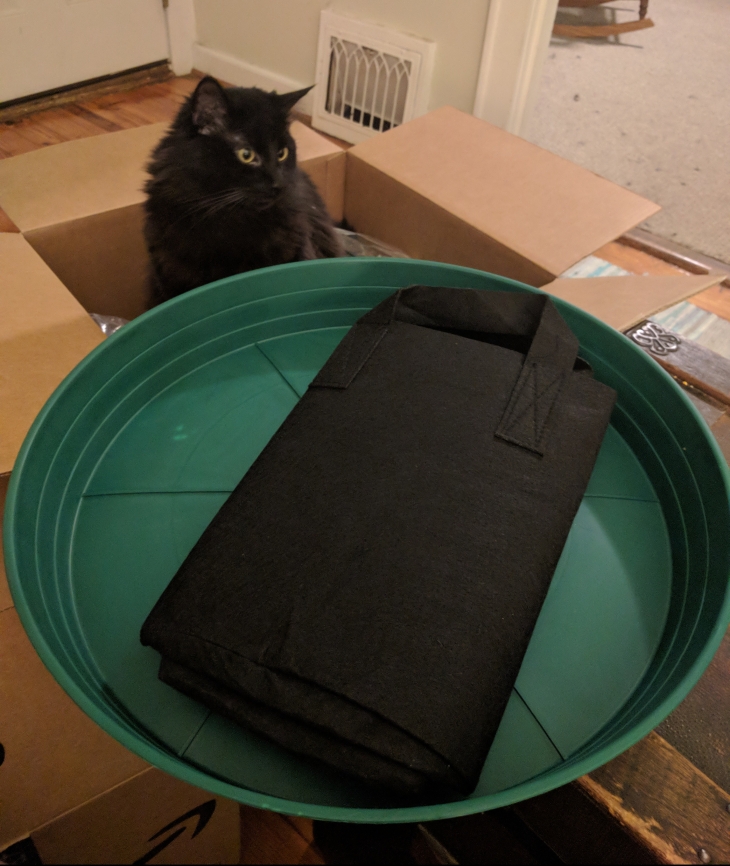 As you can see, Quill isn’t impressed, but I am. I’m thinking about how these won’t take up much space, and in fact can be stacked on a shelf, freeing up more room for me to park Hi-Yo in my already crowded garage. When it’s full of dirt, it will be sitting in the green saucer you see above. It will look like this:

Tidy, right? It will look uniform and pleasant to passersby, and it will also be really easy to water from the bottom by filling the saucer.  There are many kinds of this pot out there, and I must have looked at all of them, but the Winner Outfitters brand came in a variety of sizes and at a very affordable price. I priced these pots at Horrocks, Meijer, garden centers, and other places locally, but I found the best price on Amazon. The saucers are also courtesy of Amazon, and also come in a variety of sizes.  I picked these because they looked well made, and now that I have them, they really are.

Disclosure: I used to be a participant in the Amazon Services LLC Associates Program, an affiliate advertising program designed to provide a means for me to earn fees by linking to Amazon.com and affiliated sites. Not anymore. Shop around.

OKAY, WE ARE REALLY GOING TO TALK ABOUT POTATOES TONIGHT! So, there you are with your cut up cured potato eye chunks, or your already done for you potato sets. You’ll put a little dirt in the bottom of your container of choice, and set your potato chunks in, eye side up, and then cover it with a little dirt. Don’t crowd the pot. It looks like you have plenty of room to put a LOT of chunks in there, but remember they are going to grow up into plants. You’ll have a lot of space in your container, but that’s okay. Just cover the eye, not bury it in a lot of dirt. You can use compost if it’s well aged, or just good quality garden soil. I’ve bought the cheap stuff that’s like $1 a bag at Tractor Supply, and that’s been good enough all these years. You can be fancy if you want. Water your potatoes and go away. Come back in a few days and you’ll likely see sprouting, but if you don’t, no need to freak out. Give it some time.

Once your potatoes start to spout, they’ll look like this:

See how the blue tubs are empty-ish? It’s all good. As your potatoes get taller, mound up dirt around them. Then when they get a little taller, mound some more dirt up around them. Keep doing that till you’re at the top of your pot and can’t add more dirt. You can see how this same process would work with a taller container, or a garbage bag: just keep mounding up the dirt around the plants as they get bigger. By doing this you’ll encourage more root formation and that’s where you’ll get your potatoes! Eventually, you’ll have a pretty pile of potato plants like this:

You see how the before photo looked? This is the after. There’s no more room in those pots for dirt and see how happy they are! Potatoes will make flowers, too, and they don’t seem to be attractive to marauding deer or voracious rabbits, so that’s a serious bonus. Make sure they’re watered, not swamped, but kept hydrated

Once the vines begin to die back and yellow, then it’s getting on toward the finish line. Sometimes I reach into the dirt earlier and grab a few baby potatoes to fry up with some green beans and ham, but generally I let them go till the end of the summer. Once you decide it’s harvest time, here’s the beauty part: kick over that container and pick the potatoes out of the dirt. Bam. No digging in the ground. No blisters from the shovel handle because you are also a delicate flower, like me.

I will be placing my pots near the donated frames in the back corner of my yard, and at the end of the season, I’ll put the old potato dirt in those frames, which will then be all set for next year. Put some thought into where you want to locate them, because obviously, they will be quite heavy. Think about the kickability factor, and where you would like that dirt to go.

I’ve had some awesome harvests that had me in potatoes for weeks, and I’ve had some bummer years that only brought me a few potatoes.

It is really fun, though, to watch the plants grow and then find the potatoes. This is something kids LOVE to do, and another way to involve children in gardening.

Thanks for following along! Questions or suggestions on what’s worked for you? Comment below!

figuring it out as I go, since 1967 View all posts by Amy Crabtree Campbell

Leave a Reply to The AE Cancel reply

Food for Bellies, Food for Thought

I don't know what I'm doing, but I'm gardening anyway.

Action for a Better Life and World

From Buffalo to the Bible Belt.